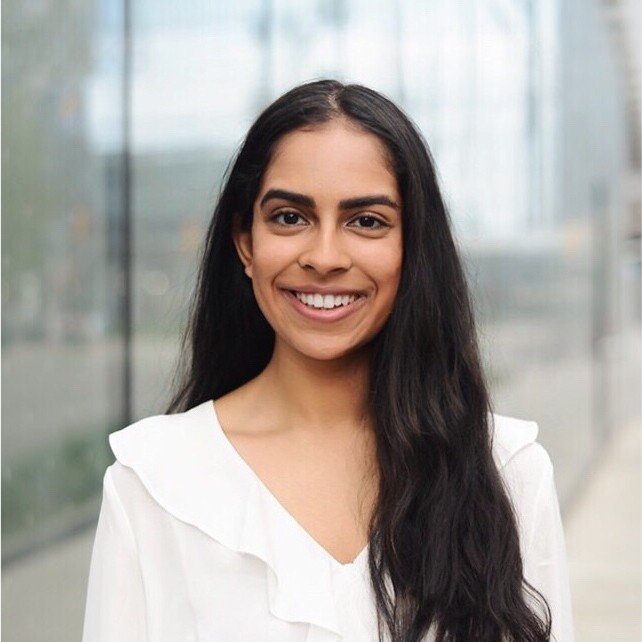 Read on to learn more about Dipti’s experience in the Core Sprint, her pivot from CPG into tech, and why she sees The Commons as an investment in her career.

Welcome, Dipti! Can you tell us a bit about who you are and how you’re involved with The Commons?

Hey, I’m Dipti, I’m an Engagement Associate at DoorDash, the technology and logistics company best known for its door-to-door delivery through the DoorDash app, and I’m an alum of The Commons’ Core Sprint.

Can you tell us a bit more about your early career experience working for a large CPG company and how that compared to your time in banking?

My first role after I graduated from university about three years ago was at PepsiCo, which is obviously a very well known global Consumer Packaged Goods (CPG) company, in finance and strategy. There, I was a Brand Finance Associate Analyst and gained a lot of experience diving into numbers, Excel models, financial models, and really built my analytical skills. That was a really crucial experience for getting a better understanding of the retail and the CPG space.

Prior to my full-time career, I had spent some time doing internships within the banking sector, which was also very finance focused. I think the difference there was that while everything at the bank was very numbers heavy, I didn't see the direct impact on the broader marketplace. Contrasting to Pepsi, where I saw how the work I was doing, such as building models, was translating into campaigns or into how we were pricing our products on the shelves. Seeing that direct impact onto the actual marketplace was huge for me.

What inspired your career pivot into tech?

One of the things I realized at PepsiCo was that being able to resonate with a brand and an organization as a consumer was really big for me. I found it was important to see the connection between my day-to-day role and my life outside of work. Soon I started to think about what I really envisioned my career to become. I was like: Okay, I love numbers, I love diving into Excel, but I've also realized that I enjoy project management and working with different teams, which I wasn't getting as much of being in a finance type role. So then I asked myself: How do I take what I've built so far and continue to develop? This got me thinking about marketing and other roles within PepsiCo, but at the same time, I didn't want to close myself off to just one organization.

I started exploring roles in tech. BizOps, Strategic Finance and Strategy were all buzzwords that I was hearing a lot about, so I wanted to explore them. As I was looking into these roles, The Commons came up on my LinkedIn feed. I looked into it and talked to a couple of friends who had joined the Core Sprint in the past. The Commons looked like it would be a really good learning opportunity to better understand what I didn't know about the tech industry. After I joined I met a bunch of people, saw a couple of the job openings come up on the Slack channels within the community, applied to a couple of things, talked to a couple folks and, next thing I knew, I got into the recruiting cycle without really even realizing it.

After having had my series of rejections in the recruiting cycle, as we all do, I eventually found my current role as an Engagement Associate at DoorDash. In my current role, it’s essentially an Account Management or Sales type of role, but being on the New Verticals side of the business, I touch everything. And that's exactly what I was looking for. I was looking to get involved in pricing strategy, product and marketing. Now I get to be super involved in running our whole consumer acquisition marketing strategy for our convenience pod.

Overall, I think my career trajectory has been about learning at each step of the process and then taking those learnings with me into the next pivot.

How did your experience in CPG prepare you for a career in tech?

Getting familiarized with the retail space was a huge plus in joining DoorDash, especially since I was joining the New Verticals side. We work very closely with the largest grocery and convenience and other retail partners across the country, so having that familiarity with the space in general, knowing the brands, knowing how to get a product on shelves, and knowing how a retailer thinks about selling products was something that really helped me.

Lastly, skills like working with different folks, being well spoken, communicating, and being analytical are things that are developed when you work in CPG and are valuable across industries within tech. Given these skills,I think that people with backgrounds in CPG are well-served to get into tech companies - whether they’re retail focused or not.

Tech and particularly DoorDash is extremely fast paced. There's so much work going on and being able to prioritize the most valuable work is crucial. A lot of the things I was working on in my previous role, at such a large company, I would classify as “nice-to-haves”, but in a startup, you need to constantly be working on projects that are providing the most value to the company. In larger CPG companies, you’ll typically have someone telling you exactly what to be working on, but in tech, you’ll likely have more autonomy over what you’re working on. This is great, but also comes with a lot of responsibility. The fact that it's really interesting, challenging work keeps me motivated, even though I'm not necessarily being told what to do by a manager.

With this working style, a lot of the work is actually created by myself, which is something that I don't think most people in traditional industries are used to. I think that's what keeps me motivated; I feel challenged but also empowered to go out and do things. So I would say that the big difference is the speed at which we move, as well as the way in which work is created and delegated.

What was your experience in the Core Sprint like once you joined The Commons?

Since the project in the Core Sprint focuses on a three-sided marketplace, the work that we were doing was actually very practical for helping me understand the three-sided marketplace at DoorDash. It really helped me understand the differences and also the similarities between a Dasher (driver), a consumer, and the merchant: all the different stakeholders that make up our business and how you have to consider all of them when making decisions.

In terms of mentorship the program was great. My mentor, Callum, was super helpful guiding my team through the project. Coming from an external industry, you're not as familiar with the way in which you should structure the problem and how you should communicate your solution. So his help, along with the workshops, really helped me out. And on breaking into tech, Callum was really candid and transparent with me about tech roles, recruiting, and helping me understand the skills that are necessary to succeed in this industry.

Lastly, by working with a team during the Sprint I got a really good understanding of how to best delegate work based on people's skills. There were people in my team who were from a consulting background who knew how to communicate really well and tell our story and pull our presentation together. For myself, I came from an analytical background and so getting familiar with SQL, running queries, doing the analysis was my area of expertise. That's kind of how we divided and conquered the project. I learned a lot about the best way to approach teamwork within a short amount of time.

How did The Commons help you with your recruiting journey and pivot into tech?

The people in the community are so helpful as well. One of the most critical elements was just how willing everyone was to set up time and just chat. A lot of time you can reach out to people through LinkedIn, but having a common community and knowing that people are all here to further their careers definitely helps in getting the direct advice that you need.

Another nice part about the community is when you receive help, we’re all eager to pay it forward later. Now that I work in tech, I've done a lot of coffee chats and have set up time with a lot of individuals who have questions about my experience in the Core Sprint or at DoorDash, or just recruiting in general. When you’re a part of this community you feel like you're not asking for too much and you're not wasting anyone's time. Everyone is here for one reason and that's to help elevate each other's careers.

Last question: now that you work in tech, what’s the number one piece of advice you give to other community members when they reach out for help with their own pivots?

Not to be too cheesy but I also just want to add that even though I joined the Core Sprint and successfully pivoted into tech, the journey doesn't stop here. I truly believe that there's still so much I want to learn at DoorDash and within tech. So I continue to post things in the #communityadvice channel or the #greatreads channel because I want to learn and to continue to discern what's next for me in my career. I think your pivot into tech doesn't necessarily end. Even if you do get the role you're looking for, it doesn't necessarily mean you stop. Industries will continue to evolve. New industries will continue to pop up. And so that's the key piece that I think being a part of this community really helps with. The Commons is all about learning and developing the skills required for any new industry or any new sort of work experience or professional experience you're looking for.

If you’d like to make a pivot like Dipti’s into BizOps roles in tech, check out the Core Sprint

learner Story
Quality Content: how John Thomas and Draft are changing the way businesses do content
We sat down with John Thomas, Co-Founder and COO of Draft, to discuss the importance of content for businesses and his experience a founder.


learner Story
What is BizOps? Comparing BizOps at a Series A Marketplace and a Series E SaaS
BizOps can look different at different companies. We sat down with two Commons alumni, Alysha and Sybil, who are both BizOps managers, to learn more about their roles.

Next 

HomeSprints
All SprintsCore (BizOps)
Product
NEW
Strategic FinanceRevenue GrowthGrowth Marketing
The Summit
How It WorksCommunityFor MentorsFor Companies
Log inJoin a Sprint

Skillful is now The Commons.
We’re more than just skills training. We're the place where high achievers come to fulfill their career potential. We combine education, mentorship and community to empower the next generation of ambitious professionals to achieve their career goals.